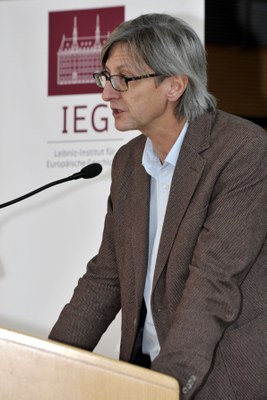 Professor László Kontler, Pro-Rector for Hungarian and EU Affairs, and History Department, Central European University, Budapest. EGO editor for the history of ideas.
I am honoured to have the opportunity to share my views on some aspects of the formation and development of the EGO project. I must clarify at the outset that whatever may sound critical in my presentation must be understood as self-critical (since I am myself a member of the editorial board and identify with its ways of procedure), and whatever is laudatory, is a tribute to a largely very successful collective effort, and especially to the efficiency of the IEG team in functioning as a switchboard among a diverse, colourful and inevitably chaotic universe of editors and authors. Thanks to the Mainz colleagues for shepherding us through this exciting adventure.

I have been requested to comment on "multi-/inter-/transnationality" in the realisation of the project. There are several dimensions to this question: the choice of topics and authors, and also more substantive aspects, such as the ways in which these topics are developed by the authors to whom they have been assigned. As far as the question of "programmatic bilingualism" (also part of my remit) is concerned, I have little else to say than that it is as much pragmatic as it is programmatic. Whether one likes it or not, global accessibility and appeal today depends on the availability in English more than on anything else. On the other hand, publishing all articles in German as well is indeed a programmatic signal that the cultivation of non-English academic discourses and academic cultures erected upon and expressed in such discourses is also indispensable for the maintenance of the same global communication.

My comments on the range of topics will take the idea of the project as their starting point. Formulated by its masterminds, as organised in terms of the ten "threads", the conceptual framework set the enterprise on a track almost inevitably ensuring, even prescribing a multiperspective, "inter- and transnational", pan-European viewpoint for the emerging articles. If this were not enough, an initial brainstorming among the members of the editorial board – followed by several work-in-progress meetings, introduced realignments, fine tunings, restrictions and expansions – led to the current structure. A fundamental feature of this structure is that it is comprehensive, but not all-embracing and finite.  One might resort to the metaphor of the tree of knowledge (in this case, of the transcultural history of Europe in the modern era), whose trunk is solidly constituted by the "threads", branching out into "surveys", "basic" and then "focus" elements. Now, just as in the case of natural trees, on our tree of knowledge there is nothing either to guarantee or to require the same number of further ramifications on each of the branches. The evident abundance, even apparent superfluity of "focus elements" – case studies highlighting the broader phenomena of transfer portrayed in the "surveys" and "basic elements" through the representation of particular agents, stories and situations – in some of the branches is certainly not matched in others. In this sense, many choices seem open to criticism as being arbitrary: in the current arrangement, European Overseas Rule is brought into "focus" almost solely through the exploration of the transfer of "legal norms", and the illustration of Knowledge Transfer is confined to Homeopathy. One could go on citing such apparent imbalances, and stress the fact that in many other cases there is a far more multifaceted "ramification" of the tree. The affiliation of the editors and the authors selected by them presumably plays a role in this. The point, however, is that just as the growth of a tree, the growth of an internet-based, online resource, is open-ended. Under these circumstances, one needs to ask how well the single case employed in a given "focus element" (or the available range of such articles) serves the purpose of illustrating the larger theme contained in the "survey" or the "basic element" – bearing in mind also the possibility offered by the device to smoothly add a theoretically unlimited number of other "focus elements" which will further nuance our understanding of the theme. Not to mention the opportunities of creating "intertextuality" among surveys, basic and focus elements. This is simply no aspect of the project that could be assessed in numerical or proportional terms.

By contrast, and definitely uncharacteristically for a student of intellectual history, in assessing "multi-/inter-/transnationality" in the recruitment of authors, I have decided to resort to a statistical overview. The figures used in this assessment reflect the status quo of the EGO site in early/mid-October 2013, and are based on my personal counting (which may be erroneous – but perhaps within the tolerable margin). Only published articles are taken into consideration. I shall look at the composition of the editorial board (including current and former editors, as well as the directors of the IEG, who are not formally listed as editors, but have taken a very active part in commissioning articles). I shall look at the geography of the recruitment of authors by the editors in both national and local terms (that means not the "national background" of authors, but rather their spatial-institutional affiliation). The data can be rendered in the following tables.

Number of locations from which articles have been submitted by country and region:

In addition to these data, one might also consider the relation of authors and editors to article source locations:

Finally, it is helpful to rank the article source locations according to the number of contributions:

What can we glean from these data? Taken as a whole, they tell us that contributions have been recruited from 16 countries (on three continents) by the editors, who come from 8 European countries. This is a very respectable spread, though within this latitude the distribution is rather uneven. The most conspicuous among the secondary impressions is an apparent preponderance of German and "Germanophone" scholarship in the realisation of the project. (I am aware that the lumping of Switzerland under the latter category is a crude, perhaps inexcusable simplification: hence the alternative "Central Europe" in the table.) The affiliation of 56 percent (17) of the editors in Germany and 73 percent (22) in "Germanophone" Europe is striking. So is the fact that 59 percent (107) of the articles derive from German, and 76 percent (139) from "Germanophone" academic backgrounds. The rest is divided nearly equally in 5–6 percent compartments among Western Europe (9), "Anglophone" Europe (the UK: 11), and the rest of Europe (13 – Northern, Southern, and Central-Eastern, individually contributing a mere 1–2 percent each). Eastern Europe is missing altogether.  Looking at the places of origins of the contributions, the most prolific one (unsurprisingly?) is Mainz, closely followed by Berlin and Vienna; together with nine other rather active source locations, all of them also in the same "Central" region, they form a group of 12 places (16 percent of a total of 77) responsible for slightly over 50 percent of all articles published in EGO. If the ranking on the list of contributing locations is disregarded and only the number of locations per region is considered, we find that 57 percent are from the German-Swiss-Austrian "core" – which also means that elsewhere the recruitment of articles was more evenly spread: The average Austrian contribution is 6 articles per location (noting, however, that apart from Vienna, it is only 1 for both Graz and Innsbruck), 3 for Germany and 2 for Switzerland; while 11 UK articles are shared among 7, and 9 contributions from the US among 8 different locations.

Yet another perspective is opened if we match editors and authors with the countries and locations they represent. How often have editors invited contributions from their own countries and cities? 113 articles or 62 percent were commissioned in the same country, and 17 percent of them (31) in the same city where the editor is based. (It must be added that within the latter category in 6 cases – 3 percent – the editor is identical with the author – hardly a blemish on the editor's side!)

All of this at first seems to cast a somewhat doubtful light on the internationality of the project. "Germanophone" participation ranges from nearly two-thirds to three-quarters according to each of the indicators above. The last table also appears to suggest that a fair amount of "in-breeding" has taken place: in over sixty percent of the cases editors chose to approach colleagues in their own national academic cultures for submitting EGO articles, and one in seven of our authors works in the same city (presumably, even the same institution) as her/his editor. One may also add that quite a few of the transnational recruitments of the editors from the "central" region were from within the borders of the region.

These doubts and reservations are not to be slighted. But are they final and decisive? They would be too easily dismissed by claiming the obvious: that just because an outstanding expert of a topic is a colleague or a co-national of an editor, the latter should not have scruples in assigning an article on the topic to her/him. The statistics may also be turned around: in the case of nearly 40 per cent of the articles published so far, or in almost every other case, we have looked beyond our national academic cultures in recruiting authors. This already puts the EGO achievement in a different light. Further, it must be recognized that a statistics of contributors solely on the basis of residence and institutional affiliation is of limited value: a prosopographic exploration would probably reveal that in terms of academic formation, experience and socialization the group under review is thoroughly international, even though not "multinational" in the strict sense of the word.

What is decisive, however, is the substance of the articles and the dynamics between them. A comprehensive analysis of the transnational credentials of the collected material which, if published in traditional media, would equal about twenty thick volumes, is obviously beyond the scope of this small position paper. I shall conclude by sharing some of the experience working with graduate students of history at my institutional home, where students arrive from several continents and dozens of countries to study topics of the comparative history of Central, Eastern and South-Eastern Europe in global contexts. Many of them choose our program precisely because they are tired of nationally anchored historical cultures, they still find it difficult to distinguish and "navigate" between the alternative methodological offers of comparative history, transnational history, transfer history, and their various modifications and cross-fertilizations. EGO's clear, concise and eminently readable "surveys articles" on these topics greatly facilitate for them a general grasp of these approaches, and the immediately available practical demonstrations and illustrations of the approaches "at work", thanks to the links to basic and focus elements (or indeed resources outside EGO), make our project in this sense tailor-made to the needs of the future generations of multi-/inter-/transnational historians. This is irrespective of the precise level of multi-/inter-/transnationality in the process of its execution, in which I am grateful and proud to have had the opportunity to play a modest part.