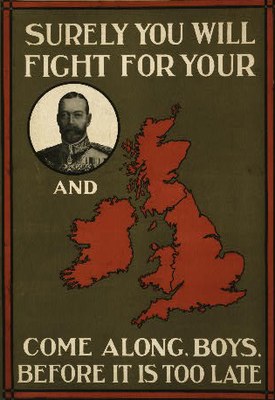 The British recruiting poster of 1915 is showing a portrait of King George V (1865–1936) with a map of the United Kingdom of Great Britain and Ireland. The message reads: "Surely you will fight for your [king] and [country]. Come along, boys, before it is too late." A year later, in 1916, the British government introduced compulsory male conscription.