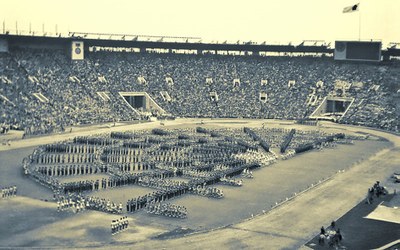 The Sixth World Festival of Youth and Students took place in 1957 in Moscow and was attended by 34,000 participants from all over the world. Sometimes seen as an expression of the Khrushchev Thaw, an era of social opening as well as economic and cultural reforms under General Secretary Nikita Khrushchev following Stalin's death in 1953, the World Festivals of Youth and Students proceed to this day. The last one was hosted in Sochi in 2017 (caption by the editorial team).