A Steyler Missionary Teaching in Togo 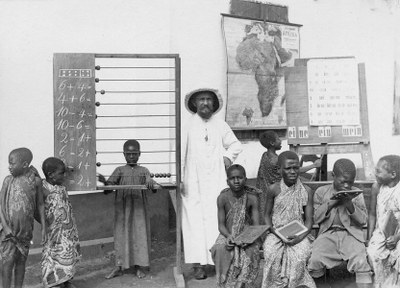 The Steyler mission (official name: The Society of the Divine Word) was founded in 1875 in Steyl (Netherlands) by Arnold Janssen, who was later canonised. At the time, the Kulturkampf (culture struggle) in Germany made it impossible to found a new congregation there. Four years after the society was established it sent its first missionaries to China. After 1890 German colonies also accepted Steyler missionaries, among others, and allowed them to do missionary work and to undertake the pastoral care of indigenous populations. In Togo, which became a German "protectorate" in the 1880s, Steyler missionaries were active between 1892 and 1918, and took up their work again in 1973.

A Steyler missionary teaching in Togo, black-and-white photograph, end of the 19th century; unknown photographer; source: with the kind permission of the Steyler Missionswissenschaftlichen Institut.