Chivalry in the Middle Ages 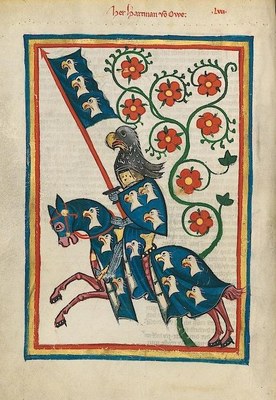 Associated with the medieval institution of knighthood, Chivalry is a code of conduct, originally conceived of as an aristocratic warrior code. The term derives from the French chevalerie, meaning horse soldiery, which also involved gallantry, individual training, and service to others. Since the 12th century chivalry was understood as a code of knightly conduct which regulated moral, religious and social matters. Such codes could be modified, especially under the influence of Christianity, but usually emphasised virtues such as service, honour and courage. Hartmann von Aue (ca. 1160/1670–ca. 1210/1220), depicted here in the medieval songbook Codex Manesse in his armour and displaying his coat of arms, is an example for an unusually educated knight. Not only a knight but also a renowned Middle German poet, Hartmann was able to read and write; skills of which only a select social circle was capable.