Flag of the autonomous region of Basque Country 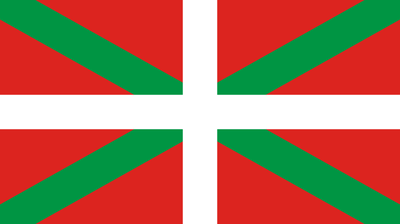 The Basque Country is a region that covers part of southwestern France and northeastern Spain. It has a strong regional identity and its own language. In contrast to the French Basques, the Spanish País Vasco strove continuously for independence. In 1895, this led to the founding of the Partido Nacionalista Vasco (PNV). Nevertheless, apart from a brief period of autonomy in 1936-1939, the Spanish Basque Country remained part of the Spanish state until the 21st century. This led in the second half of the 20th century to political struggles and numerous terrorist acts by the Basque underground organization Euskadi Ta Azkatasuna (ETA).