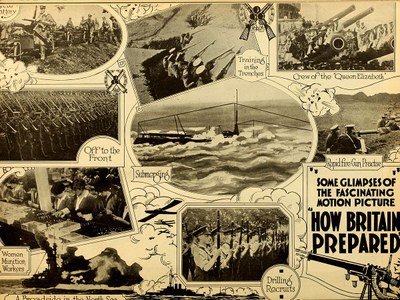 This advertisement for the film How Britain Prepared contains a number of still images depicting various aspects of the war preparations of Great Britain (clockwise from top centre): "Training in the Trenches", "Crew of the 'Queen Elizabeth'", "Rapid Fire Gun Practise", "Drilling Recruits", "Women Munition Workers", "Off to the Front". The photographs are supplemented with drawings. In the middle, there is a drawing of a submerging submarine ("Submerging"), and the drawing on the bottom left depicts the bombardment of a warship ("A Broadside in the North Sea").