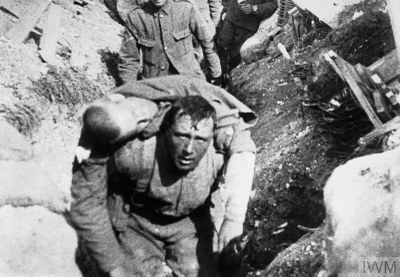 The Battle of the Somme is considered the first documentary film in history. It was recorded in 1916 during the Battle of the Somme by two cameramen commissioned by the British government and shows various aspects of the fighting at the front, including footage of injured and dead soldiers. This image is from an excerpt showing an unidentified soldier carrying an injured comrade on his back along the trench. This still photo became an iconic image of the First World War.