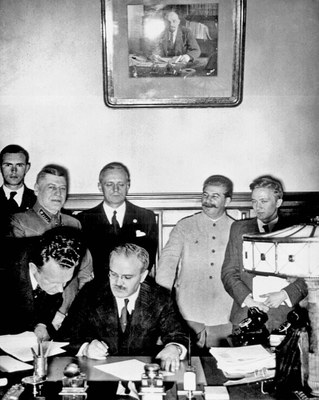 The German-Soviet Nonaggression Pact (also called Nazi-Soviet Nonaggression Pact, German-Soviet Treaty of Nonaggression, Hitler-Stalin Pact or Molotov-Ribbentrop Pact) was signed in Moscow on 23 August 1939, only about a week before World War II was to begin. The photograph shows the Soviet Foreign Minister Vjačeslav Michajlovič Molotov (1890–1986) signing the pact while the Foreign Minister of Nazi Germany, Joachim von Ribbentrop (1893–1946), and Iosif V. Stalin (1879–1953) stand behind him. The two parties agreed among other things not to attack each other, not to support any third power attacking the respective other party to the pact and to solve differences by negotiation. In a secret protocol, which was reached on the same day, both parties divided Eastern Europe into German and Soviet spheres of influence. The pact was broken on 22 June 1941 when Nazi Germany attacked the Soviet Union, after having invaded much of Western and Central Europe.