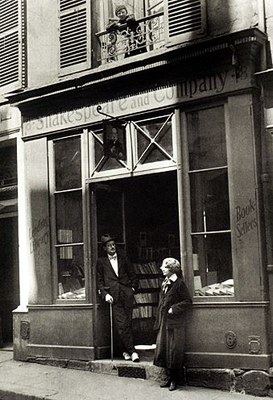 Between the two World Wars, a number of American immigrants settled in Paris, soon forming an intellectual community which had a considerable cultural influence due to the number of artists, writers and journalists that belonged to it. Among them was Sylvia Beach (1887–1962), a publisher and founder of the famous book shop "Shakespeare and Company". The photograph shows her in the company of the Irish writer James Joyce (1882–1941), whose most famous novel Ulysses she published in 1922.

James Joyce and Sylvia Beach outside the door of Shakespeare and Company on the Rue de l'Odéon, black-and-white photograph, Paris 1920, unknown photographer; source: The Poetry Collection of the University Libraries, University at Buffalo, The State University of New York.