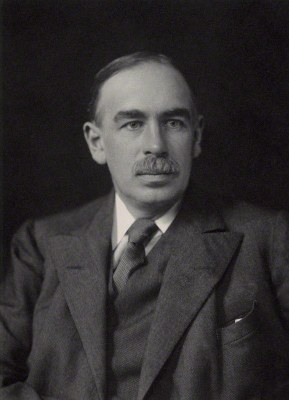 John Maynard Keynes (1883–1946) is considered to be one of the most influential economists of the 20th century and one of the founders of modern macroeconomics. During the First World War, Keynes, who was educated at Eton and a lecturer at became a lecturer at the University of Cambridge in 1909, took up a position at the Treasury and served as a government representative to the Versailles peace conference in 1919, where he strongly but unsuccessfully opposed Germany's high reparation payments. His frustrating experiences motivated him to publish The Economic Consequences of the Peace in the same year. Most prominently, he propagated a departure from the concepts of neoclassical economics in his most influential work, The General Theory of Employment, Interest and Money, published in 1936. Keynes argued among other things that the level of employment is determined by the spending of money (aggregate demand) and not by the price of labour. A member of the intellectual circle of the Bloomsbury Group, Keynes was not only a politically engaged economist but also a noteworthy writer as well as an avid supporter of the arts.