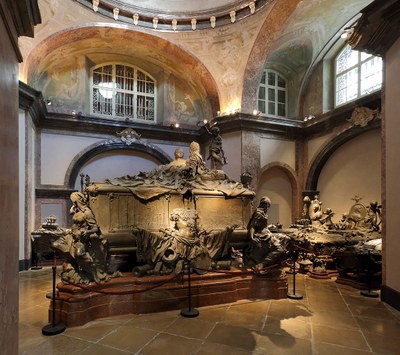 The image shows the so-called "Tomb of Maria Theresa" in the Vienna Capuchin Crypt. Members of the Habsburg and Habsburg-Lothringenfamilies have been buried in the magnificent burial place since the 17th century. The tomb contains, among other things, the double sarcophagus of Empress Maria Theresa (1717–1780) and Emperor Franz I Stephan (1708–1765) as well as six sarcophagi of their daughters, daughters-in-law and granddaughters.