Marble Frieze of the Parthenon 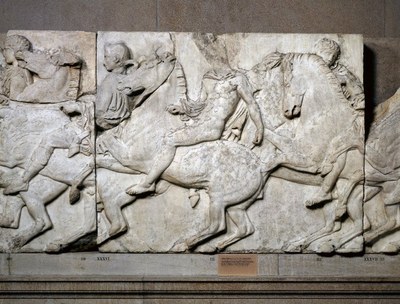 The marble relief of the northern frieze of the Parthenon, created between 438–432 BC, shows a procession honoring the goddess Athena. The three horsemen depicted are shown in quite different ways, some in full attire with cloak and tunic, some unattired. The Parthenon was erected as a temple to the city goddess Pallas Athena Parthenos on the Acropolis in Athens in gratitude for the rescue of the Greeks after the last war against the Persians. In 1801, Thomas Bruce Lord of Elgin and Kincardine (1766–1841) had large parts of the outer marble decorations brought to London. The dispute over the restitution of these so-called "Elgin Marbles" continues to this day.