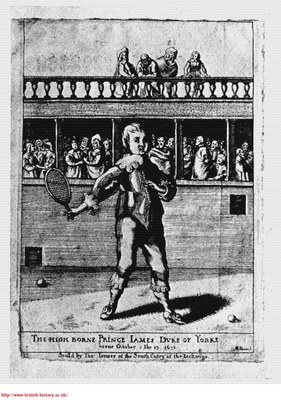 The education of King James II of England (1633–1701), who reigned from 1685 to 1689, included learning how to play jeu de paume, which was very popular among Europe’s aristocratic elite in the 17th century. While on their tours, many noblemen visited courts so they could at least watch the game, which had extremely complicated rules. The image also shows a number of people crammed into loge seats. They are probably courtiers attending the match of the future king.