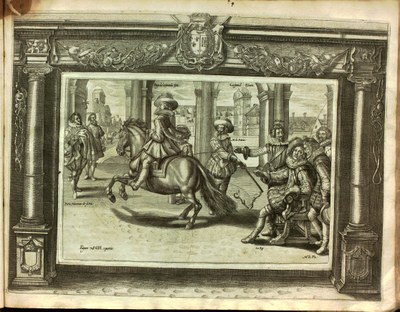 During the Early Modern period, riding was a key ingredient of a nobleman’s education. Good horsemanship (including dressage) was essential in order to survive at court and in military service. There was a particular demand for vaulting, skills specially required for tournaments. Antoine de Pluvinel, the riding instructor of the future King Louis XIII, elaborated a theory of riding. It was posthumously published in a book that included a number of representative engravings and became one of the most successful books of its kind in the early modern period. The example shown here illustrates, for example, how a page of the royal stables performs a routine before the king, as Pluvinel explains it to him.