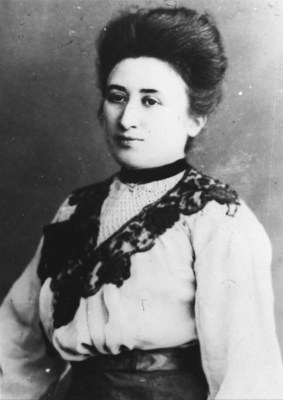 This black-and-white photograph shows Rosa Luxemburg (1871–1919) in 1915. The political activist, socialist und philosopher was born in Poland and emigrated to Switzerland in 1889 to study at the University of Zurich. In 1897 she moved to Germany where she became an active figure in the German Social Democratic Party (SPD). The Social Democratic Party's support of Germany's war efforts in 1914 led to a rift in the party. Luxemburg and other members of the SPD founded first the "International Group" and later in 1916 the "Spartakusgruppe" (Spartacus Group) before officially splitting from the SPD. In December 1918 the Spartacus Group was formally renamed the Communist Party of Germany (KPD). After the launch of the Spartacist uprising in January 1919 by the KPD and the Independent Socialists, Luxemburg and Karl Liebknecht (1871–1919) were taken prisoner and murdered in custody (caption by the editorial team).