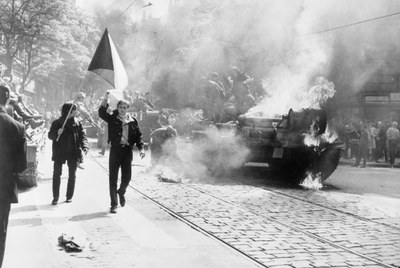 This black-and-white photograph shows protesters during the soviet invasion in Prague in 1968. They are walking past a burning soviet tank while waving the Czechoslovak flag. The period of the so-called "Prague Spring" began in January 1968 after Alexander Dubček (1921–1992) was elected First Secretary of the Communist Party of Czechoslovakia (KSČ). As party leader Dubček launched a period of political liberalization and democratization in the Czechoslovak Socialist Republic. This period came to an end on 21 August 1968 after troops of the Soviet Union and of Warsaw Pact members invaded the country to suppress the reforms (caption by the editorial team).