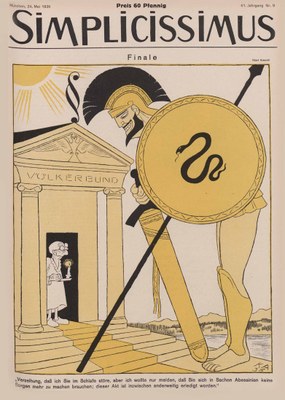 This cartoon shows a Roman soldier, who may be identified as Benito Mussolini (1883–1945), knocking on the door of an old man whose house bears the sign "Völkerbund" ("League of Nations") and who seems to have been asleep in the middle of the day. The caption reads:

"Excuse me for disturbing you in your sleep, but I just wanted to inform you that you need not worry about Abyssinia any longer; this act has been taken care of in a different way."

(Caption by the editorial team)