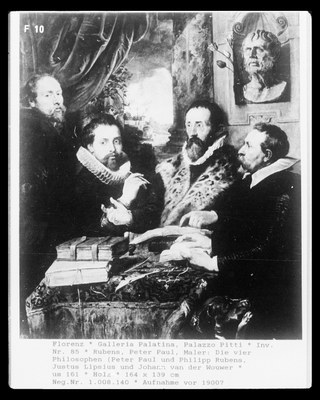 The philosopher Justus Lipsius (1547–1606) taught at the universities of Jena, Leiden, and Leuven. He was considered a leading figure of neostoicism, a philosophical justification of the early modern principality. His writings were read throughout Europe and were also found in the travel libraries of quite a few noblemen in the early 17th century. Even Sigismund von Birken, who glorified the journey of the son of a prince in his book Hochfürstlicher Brandenburgischer Ulysses referred to the values promoted by Lipsius in the preface. The portrait shows Justus Lipsius under a bust of Seneca, surrounded by the Reuben brothers and Jan Wowerius.