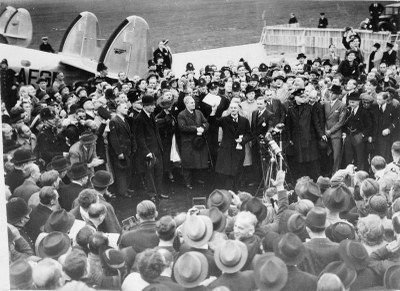 On 30 September 1938 the British Prime Minister Neville Chamberlain (1869–1940) returned to London after he had signed the Munich Agreement with Hitler and Mussolini a day earlier. At Heston Aerodrome he was welcomed by a huge and cheering crowd, eager to hear the news of the agreement reached. The photograph shows Chamberlain holding the paper which contained the resolution to commit to peaceful methods in the settlement of the Czechoslovakian problem. That day Chamberlain repeatedly proclaimed his confidence that he had managed to secure the peace in Europe.