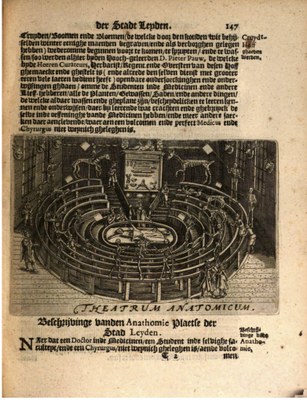 The anatomical theatre in Leiden could be visited by city residents and travellers. This copperplate engraving from 1647 shows it during the summertime. Preserved specimens from human corpses and animals are laid out on the dissecting table and the spectator benches. While the theatre was in museum mode during the summer, visitors would wander among these specimens and inform themselves. A cabinet containing anatomical instruments can been seen in the background.