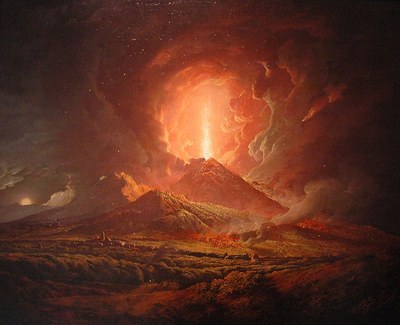 When Vesuvius erupted again in 1631 after centuries of inactivity, the event was immediately recorded pictorially and disseminated. Until the late 18th century, the volcano had a strong attraction for noblemen and burghers on their travels. For Johann Caspar Goethe, the father of Johann Wolfgang Goethe (1749–1832), the ascent up Vesuvius in 1740 represented "bislang den Höhepunkt meiner Reise" ("the highlight of my trip so far"). Even from the bed of his inn, he could see "wie der Berg unablässig Rauch ausstößt" ("how the mountain constantly emits smoke"). As with other natural historical monuments, it was usual to perform small experiments in the crater of the volcano: Goethe and his travelling companions stuck white pieces of paper into fissures and discovered that they did not catch fire, but only became charred. (Goethe, Reise durch Italien 1999, pp. 195ff.)