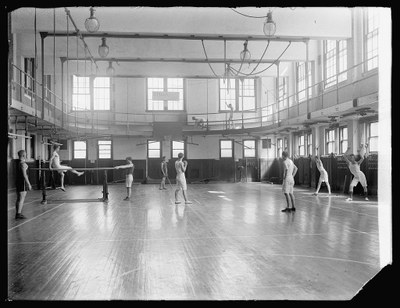 This black-and-white photograph shows young men practicing gymnastics at a facility by the YMCA. From the beginning many buildings of the YMCA, especially in America, included gymnasiums and sports facilities. The fact that a number of hugely popular games were invented by members of the association – such as basketball (in 1891 by James Naismith, 1861–1939) and volleyball (in 1895 by William George Morgan, 1870–1942) – underlines the role sport, fitness and public health played (and still play) within the association.