von by EGO-Redaktion Original in Deutsch, angezeigt indisplayed in Englisch▾
Rejection and Learning through Military Victories and Defeats 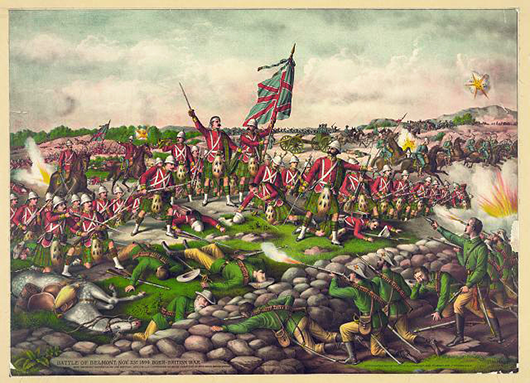 This thread examines the potential for conflict in European history and, at the same time, considers influential events that often produced intellectual turning points. The aspects of interest here are the processes of communication and exchange that took place during and as a result of war, whereby military defeats, in particular, can frequently be seen as the trigger for intensive processes of transfer and learning. On the other hand, the direct and indirect impact of military developments themselves will be examined: the thread highlights not only specific forms of transfer, for example through military alliances, occupation, captivity during war or peace treaties, but also the resistance to these, for example pejorative re-interpretations of "foreign" elements. The thread Alliances and Wars, thus, also represents the fact that European history is by no means characterised by only the exchange of ideas and wares, but also the fact that reciprocal relationships always contained the potential for conflict.

Revolutionary and Napoleonic France conducted a whole series of wars before and after the turn of the 19th century. The article Revolutionary and Napoleonic Wars depicts the various conflicts and changing alliances, underlining how they were connected to the network of European relationships from the pre-revolutionary era. It also investigates whether and to what extent the achievements of the revolution were diffused through war and occupation in Europe.
An innovation introduced in France in 1793 was the so-called Levée en masse, the universal military service for all unmarried men between 18 and 25. The article depicts this mass conscription instituted by the National Convention, which can be seen as the moment in which the idea of the nation under arms was born. Not only does it investigate the transfer of the concept of the Levée en masse in Revolutionary France's direct chronological and geographical proximity, i.e. how Prussia and Austria responded to this challenge, but also its impact up into the present, sometimes in entirely different geographical and political contexts, for example Che Guevara's partisan war in Latin America.