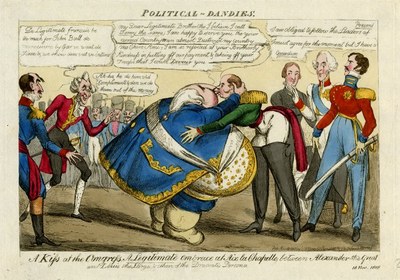 This caricature depicts Louis XVIII of France (1755–1824) kissing Alexander I of Russia (1777–1825) at the third peace congress in Aix-la-Chapelle 1818. On the left, we can see two Frenchmen commenting the scene, whereas Frederick William III of Prussia (1770–1840), Francis I of Austria (1768–1835), and a young man are watching on the right hand side. Besides Russia, France, Prussia and Austria, Great Britain also attended the congress, which had the main aim to secure peace and the stability of royal power throughout Europe after the Revolutionary and Napoleonic Wars.

A kiss at the congress, a legitimate embrace at Aix la Chapelle, between Alexander the Great and Louis the Large, & others of the dramatis persona, hand-coloured etching, 1818, unknown artist, printer: William Heath, publisher: S. W. Fores, London; source: British Museum BM Satires 13007. © The Trustees of the British Museum.