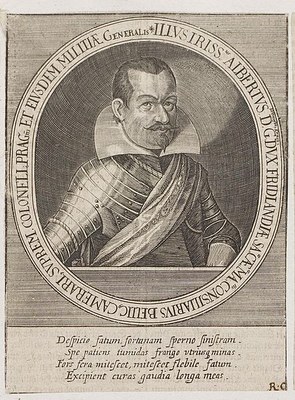 Albrecht von Wallenstein (or Waldstein, 1583–1634) was the supreme commander of the armies of the Holy Roman Empire and a major figure of the Thirty Years' War. His ambition earned him the suspicion of Emperor Ferdinand II and Wallenstein was assassinated with the emperor's approval. A legendary figure and subject of a trilogy of plays by Friedrich Schiller (1759–1805) as well as other works of art and literature, Wallenstein’s military significance lay in his devising a system of “war taxes”, whereby the costs of war were to be borne by both sides.