Augustin Heckel, The Battle of Culloden 1746 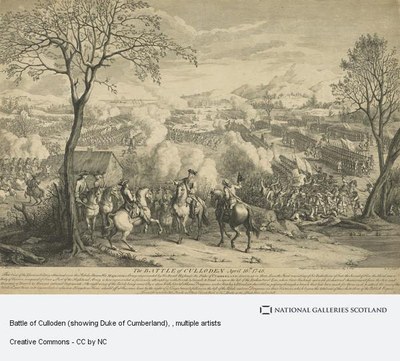 The Jacobite rising of 1745 was the attempt by Charles Edward Stuart, known as “Bonnie Prince Charlie”, to restore the House of Stuart to the British throne. "Jacobitism" was named for the last Stuart king, the Roman Catholic James II, who had been deposed in the "Glorious Revolution" of 1688. Its supporters originated mainly in parts of the Scottish Highlands and North-Eastern lowlands, Ireland, and parts of Northern England. The rising of 1745 – the Second Rising – culminated in a battle on 16 April 1746 at Culloden Moor, near Inverness. In this, the last pitched battle on British soil, Stuart’s troops were routed by the forces of the Crown and suffered between 1.500 and 2.000 casualties (killed or wounded) out of approximately 7.000 combatants. A principal consequence of the failed rising was a crackdown on autonomous elements of Scottish, particularly Highland, culture and the clan system. The Stuart cause was lost.