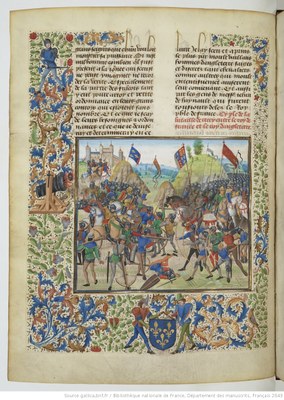 The Battle of Crécy took place on 26 August 1346 during the Hundred Years' War between England and France. A large army of French, Genoese and Majorcan troops led by Philip VI of France (1293–1350) was defeated by the much smaller English, Welsh, and allied mercenary troops led by Edward III of England (1312–1377). The English victory was not only the result of tactical flexibility and a new utilisation of the terrain which had already helped the troops in their recent battles with the Scots, but also of the rise of the longbow as the dominant weapon and the use of an early cannon, the ribauldequin.