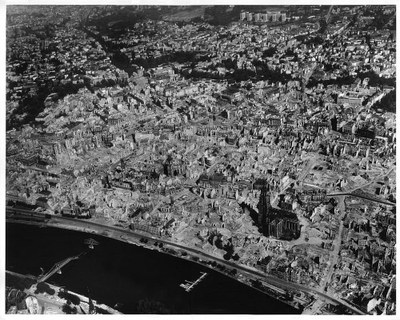 The air war began with German attacks on Polish cities in 1939. Notorious bombings of 1940 included the German attack on Rotterdam, destroying most of the old city, and the beginning of the "Blitz", the bombardment of British cities. The British bombing campaign against Germany began in 1939/1940 with attacks on coastal and western cities. Major raids began in 1942 with "Operation Millennium", in which over 1000 aircraft of the Royal Air Force Bomber Command attacked Cologne. The strategy of "moral bombing" sought to break the morale of the German civilian population. Daytime raids by the US Army Air Force began in 1943. Some 60,595 civilians were killed by bombing raids against Great Britain, and between 305,000 and 600,000 in Germany.

This aerial photograph of the old city of Frankfurt, taken in June 1945, is a fairly typical image of the destruction wrought by fire bombing.