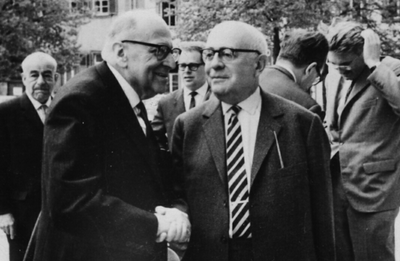 Max Horkheimer and Theodor W. Adorno (foreground) in 1964 at the Max Weber congress of sociologists in Heidelberg. These sociologists and philosophers are perhaps the best-knowm representatives of the first generation of the “Frankfurt School”, whose “critical theory” built on the ideas of Hegel, Marx and Freud. Their centre was the Frankfurt Institute for Social Research, which was refounded after the Second World War by members returning from exile.