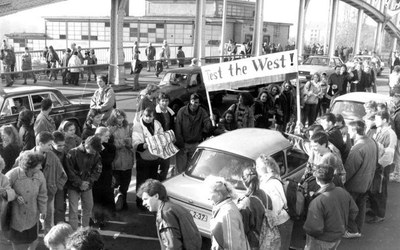 The Bornholmer Strasse border crossing between East and West Berlin, shortly after the fall of the Berlin Wall in November 1989. West Berliners welcome their eastern counterparts (in their distinctive Trabant cars) with a banner reading "Test the West". At the time, this was the advertising slogan of a well-known brand of cigarettes, thus combining the promises of political freedom and affluent consumerism.