Group of sepoys at Lucknow 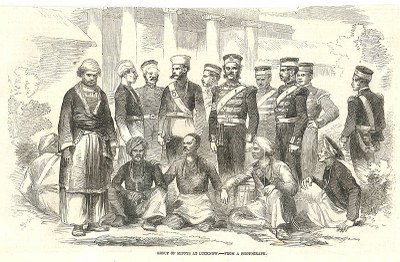 The term sepoy has become a byword for native soldiers in the service of the European powers in India, though initially it denoted only a particular class of soldier, i.e. Hindu or Muslim soldiers without regular uniform or discipline. The British East India Company’s army of 300,000 men consisted overwhelmingly of sepoys, recruited from various local communities. Following the Indian “mutiny” or rebellion of 1857, its surviving regiments were merged into a new Indian Army under the direct control of the British Crown. The term is still used today for private soldiers in the armies of India, Pakistan, Bangladesh and Nepal.

This image (or other media file) is in the public domain because its copyright has expired. This applies to Australia, the European Union and those countries with a copyright term of life of the author plus 70 years.