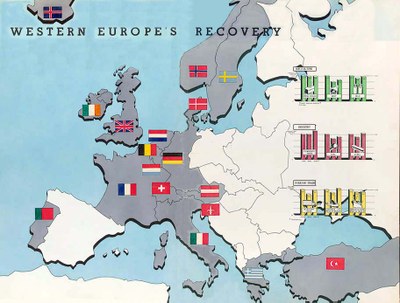 This map shows the countries that were part of the Marshall Plan. Almost all European nations outside the Soviet bloc were members of the plan from the beginning. The two exceptions were Spain, which as a dictatorship under Franco was not invited to participate, and West Germany, which was under Allied occupation and did not become a full member until 1949, after a significant measure of self-government had been restored. Graphs on the map compare agriculture, industry, and foreign-trade levels in 1950, the midpoint of the Marshall Plan, with prewar production in 1938.

- Text from For European Recovery: The Fiftieth Anniversary of the Marshall Plan, Online Exhibition, Library of Congress.