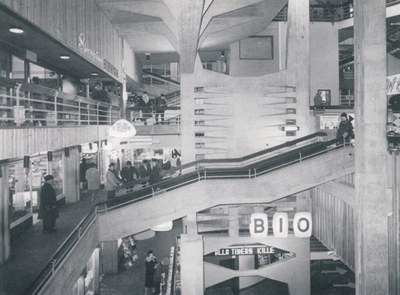 Europe's first indoor shopping centre or mall was bulit in the northern Swedish town of Luleå to a design by the Englishman Ralph Erskine. Although the "Shopping", as it was called, was intended to provide a public space during the cold, dark winter months near the Arctic Circle, comparable malls originated in the United States and can today be found in urban and suburban areas throughout the world. Unlike its forerunner, the department store, the mall offers a variety of distinct retail shops – indeed, often including department stores – restaurants and sometimes leisure facilities under a single roof or in a closed complex.