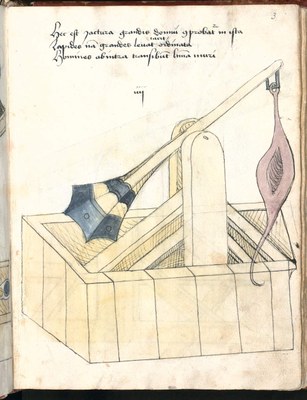 This drawing of a trebuchet, a type of catapult designed to break or circumvent fortifications in siege warfare, is included in a copy of Conradus Kyeser’s (1366–1405) Bellifortis from 1439, a book on military technology which was hugely popular throughout the 15th century. As the most prominent illustrated work on military engineering of the Late Middle Ages, the book was widely disseminated throughout Europe. There are 45 surviving copies of the manuscript with varying structure, content and images.