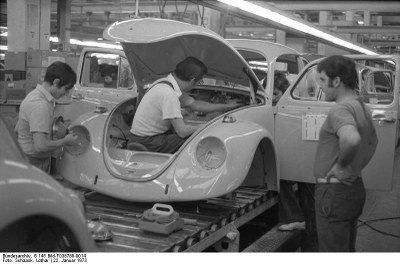 A pre-war design originally central to Hitler's plan for the mass motorisation of the German public, full-scale production of the Volkswagen ("people's car") only began after 1945 under British military authority. The millionth "Beetle", as the car became affectionately known, rolled off the conveyor belt in 1955. Total production exceeded 21.5 million by the time the last Beetle was built in 2003, in Mexico. Known for its reliability, the Beetle was a huge success in export markets, too, and soon became an icon of Germany's post-war "economic miracle".