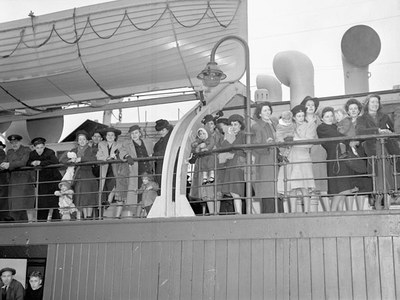 Relationships between German women and members of the occupation forces were frequent in the post-war years. A 1955 survey concluded that such relationships had produced 66,730 children born out of wedlock in the preceding ten years, with approximately 12,000 marriages. 20,000 women left Germany between 1946 and 1949 to marry their American fiancés.

Such marriages and relationships also occurred before in the UK, where allied troops were stationed during the war years. This 1944 photograph shows British women and their children leaving for Canada.