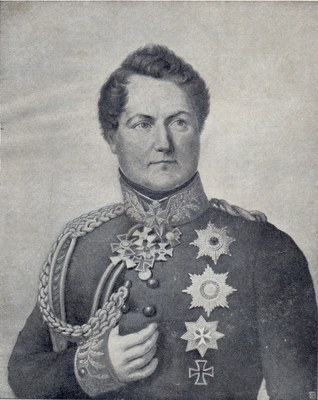 Count (from 1814) August Wilhelm Anton von Neidhardt (1760–1831), Prussian Generalfeldmarschall (field marshal) and military reformer.  After serving in an Austrian regiment, he entered the service of the Margrave of Bayreuth-Ansbach. 1782/1783 took part in the American Revolutionary War on the British side. From 1785 in Prussian service, he was one of the leading military reformers together with Scharnhorst (abolishment of corporal punishment, 1808; introduction of universal military service, 1814); took part in the battles of Leipzig (1813) and Waterloo (1815).