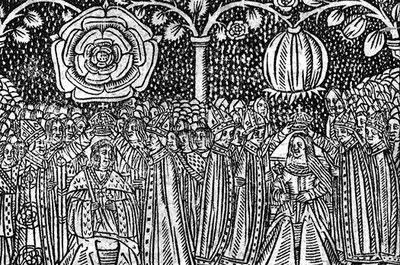 The invention of printing allowed for the distribution of lucrative commercial news as brochures or illustrated broadsheets. The illustration shown here is a leaflet that depicts the coronation of Henry VIII of England (1491–1547) and his wife Catherine of Aragon (1485–1536).

Stephen Hawes (d. 1523?), A ioyfull medytacyon to all Englonde of the coronacyon of our moost naturall souerayne lorde kynge Henry the eyght, woodcut illustration of a broadsheet, London 1509; image source: Cambridge University Library, Short-title catalogue, no. 12953. Reproduced by the kind permission of the Syndics of Cambridge University Library.