An Experiment on a Bird in the Air Pump 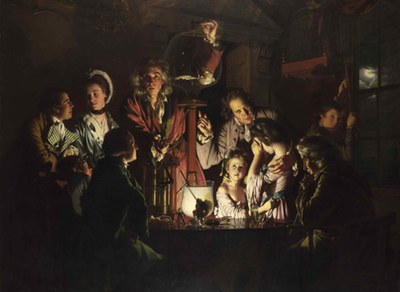 Experiment as spectacle. This painting by Joseph Wright of Derby portrays an experiment with a bird in an air pump which is being performed in front of an interested audience which includes children. The dramatic nature of the action – will the cockatoo survive once the air has been removed? – is emphasized by the strong chiaroscuro effects.

Joseph Wright of Derby (1734–1797), An Experiment on a Bird in the Air Pump, oil on canvas, 1768; source: © National Gallery, London, http://www.nationalgallery.org.uk/paintings/joseph-wright-of-derby-an-experiment-on-a-bird-in-the-air-pump.