Anti-Saccharites, -or- John Bull and his Family Leaving off the Use of Sugar, 1792 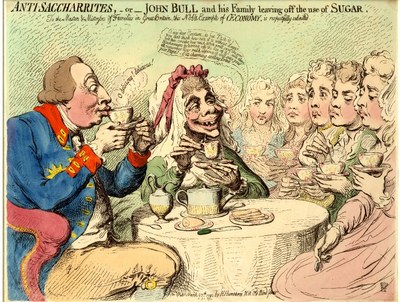 This caricature shows George III of England (1738–1820) with his wife Charlotte (1744–1818) and their six daughters at the tea table. The queen tries to persuade the sceptical daughters of the pleasures of drinking unsweetened tea with the following argument: "You can't think how nice it is without Sugar: - and then consider how much Work you'll save the poor Blackeemoors by leaving off the use of it! - and above all, remember how much expence it will save your poor Papa!" Clearly, there are economic considerations as well as moral arguments for the sparing use of sugar.