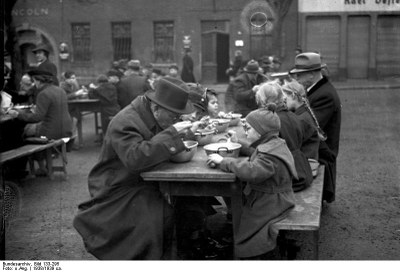 "Stew Sunday" was a propaganda and charitable campaign of the National Socialists, which was introduced in 1933 and which was renamed Opfersonntag ("Sacrifice Sunday") during the Second World War. The citizens were encouraged to have stew instead of the usual lavish Sunday dinner once a month, and to donate the money which they had saved in the process to the Winterhilfswerk (Winter Assistance Works). The Winterhilfswerk, which was financed by means of more or less voluntary donations from the public, was supposed to spend these donations for the benefit of the needy and the unemployed. This public stew dinner in Worms was organized to draw attention to the work of the Winterhilfswerk.