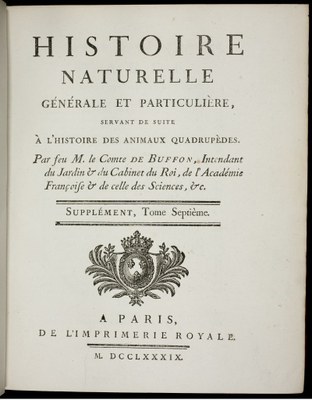 Histoire naturelle générale et particulière (General and Specific Natural History) is considered the most important work of the French naturalist Georges-Louis Leclerc, Comte de Buffon (1707–1788). Up to the time of his death, 36 volumes had been published, and a further eight volumes were subsequently published by other editors. In contrast with Carl von Linné, Buffon propounded the view that nature had developed in evolutionary steps and it could not be recorded using a taxonomic system due to its differences and its variety.