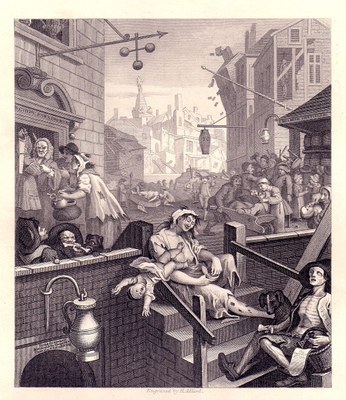 This steel engraving published by William Hogarth under the title "Gin Lane" was part of a campaign against the excessive consumption of gin among the poorer social classes of London. This campaign was conducted in the mid-18th century under the aegis of the writer and magistrate Henry Fielding (1707–1754). In 1751, the sale of this high-proof liquor in ordinary shops was prohibited. This measure was aimed at bringing an end to the kind of excesses that are depicted in the engraving.