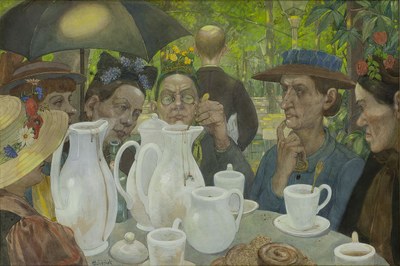 The title of this painting by Hans Baluschek (1870–1935) refers to a special form of gastronomy which emerged around 1800 in the Berlin suburb of Treptow. The Saxon hostelry owners who had settled there did not want to pay for the drinks licence, and were thus prohibited from serving any. An increasing number of Berlin hostelries then came up with the idea of offering hot water and crockery to their guests, who could then make their own coffee using coffee powder which they had brought with them. Such hostelries, which displayed the sign "Hier können Familien Kaffee kochen", existed in working class neighbourhoods into the 20th century.