Illustration of the Famine in Northern Sweden in 1867 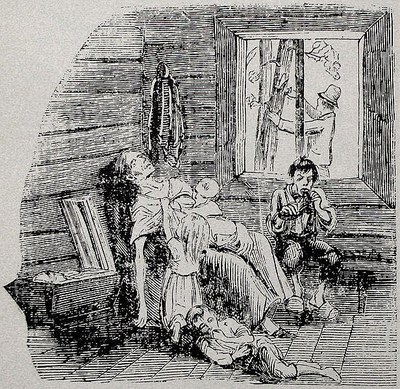 Between 1866 and 1868, Finland and northern Sweden experienced a dramatic famine, during which approximately 15 % of the inhabitants of the region died. Having experienced a number of bad harvests in the preceding years, extreme rain during the summer of 1866 resulted in a total harvest failure, and the subsequent winter was particularly harsh. The harvest of 1867 was also largely destroyed by inclement weather. This sketch published in the newspaper Fäderneslandet shows the efforts of a starving family to feed itself with tree bark and leather. The situation only began to return to normal from 1868.