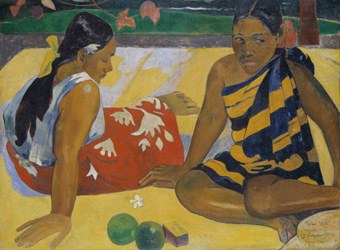 The colorful works of French painter Paul Gauguin, who lived on Tahiti from 1891 to 1893 and again from 1895 to 1901, depict an idealized exotic paradise and thereby contributed to European south sea romanticism. This painting is a variant of his "Femmes de Tahiti" from 1891, now in possession of the Musée d'Orsay in Paris, in which he replaced the sensible mission clothes worn by the woman on the right with a colourful Tahitian dress. He thereby further enhanced his vision of Tahiti as an unspoilt paradise untouched by Western civilization.