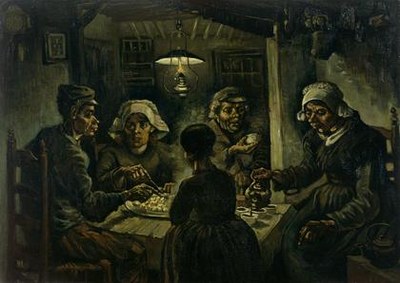 The potato, which had initially spread slowly throughout Europe, ultimately became one of the most important foodstuffs, particularly among the impoverished classes. It did not become part of bourgeois cuisine until the 19th century. Vincent van Gogh's (1853–1890) painting The Potato Eaters from 1885 depicts a farming family eating a simple meal of potatoes. Another colonial product, coffee, which had by then spread to the lower social classes, is served with the meal.