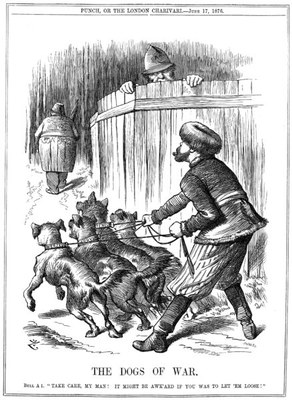 This caricature in the English Punch magazine illustrates the political influence of the Russian Empire on the Balkan states in June 1876. Russia is depicted as a dog handler, who is barely able to keep his four dogs (the Balkan states) from attacking the figure representing the Ottoman Empire that can be seen in the distance. At the beginning of July 1876, Serbia and Montenegro did in fact declare war on the Ottoman Empire, and Russia decided to do the same in 1877.