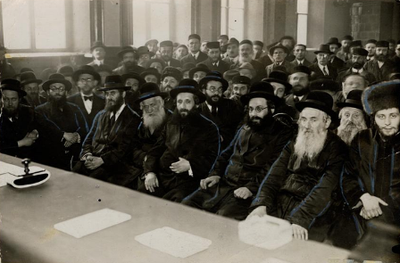 Even before the re-founding of an independent Polish state, the representatives of orthodox Judaism succeded in forming political organizations. Agudas Yisroel grew into one of the strongest Jewish parties in Poland. One of its founders and principal activists was the Zaddik of Góra Kalwari, a fact which secured considerable support for Aguda among the Hasidic community. (Marie Schumacher-Brunhes, Lille)